The patch adds an additional 13k words to the game (around 60-90 minutes of reading in total), showing what happens after the "fade to black" moments in the story.

Keep in mind that this is not your usual adult patch.

It has explicit descriptions, but no explicit images.

It's been created in such a form with the hope that a well written descriptive narrative will spark your imagination better than a few drawn images might.

The bs_patch.rpa file should be placed in the "game" folder in your Blankspace directory.

When the game successfully detects the patch's presence, the words "PATCH ENABLED" will appear in small text in the bottom right corner of the start menu screen after launching the game.

(As I wrote in a review, but for anyone else to see...)
You guys made the right call. The writing was very engaging, with lots of character expression, and it would've been really difficult to get images for all of that. It was far better to stick to your writing than to compromise on it for the sake of images.

I was under the impression there would be 18+ cgs? If not that's fine, I think if you feel it isn't appropriate for the story you're trying to tell that's better, but I just thought there would be.

An 18+ patch was originally planned, and it's true that often means CGs.

When we came to actually creating the patch content, we opted to write the story first, and then consider how to fit it into the game (as opposed to drawing an image or two and then writing to fit the images).

As you've probably seen, there ended up being quite a lot of that written content (definitely more than we'd originally guessed we'd have). Beryl and Chris are in an interesting situation, and the ideas flowed well.

But that then led to the realization that to adequately illustrate all the action would take a tremendous amount of effort (and we're all too aware of how often you can hit an h-scene in a game, and so much of the story ends up mismatched to the static image, and we didn't want that either).

So we were faced with a choice - we could add months (a lot of months) to our development time (for content that not all players will want). Or we could cut one or more of the explicit scenes out entirely (but we liked them all!)

And neither of those were very appealing choices! So we chose to focus some additional art resource within the main game, and allow our readers to use their imaginations to fully picture the 18+ scenes in their entirety.

Beryl tells us that she appreciated the extra time she got to spend with Chris, too. ;)

Gotcha, I just wanted to make sure if I needed to check back on that. I think that's the better decision, lets people focus more on the puzzles and story. Besides from your other vn, Soulset, I could tell you had good writers, so this is still a + to the experience.

Yes, this patch works with both the Steam and itch versions of the game. :) 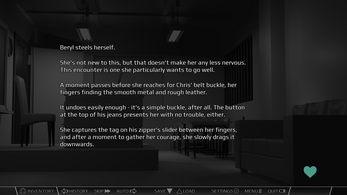 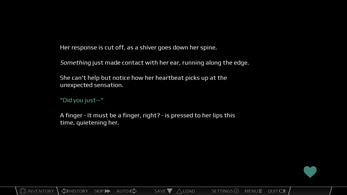